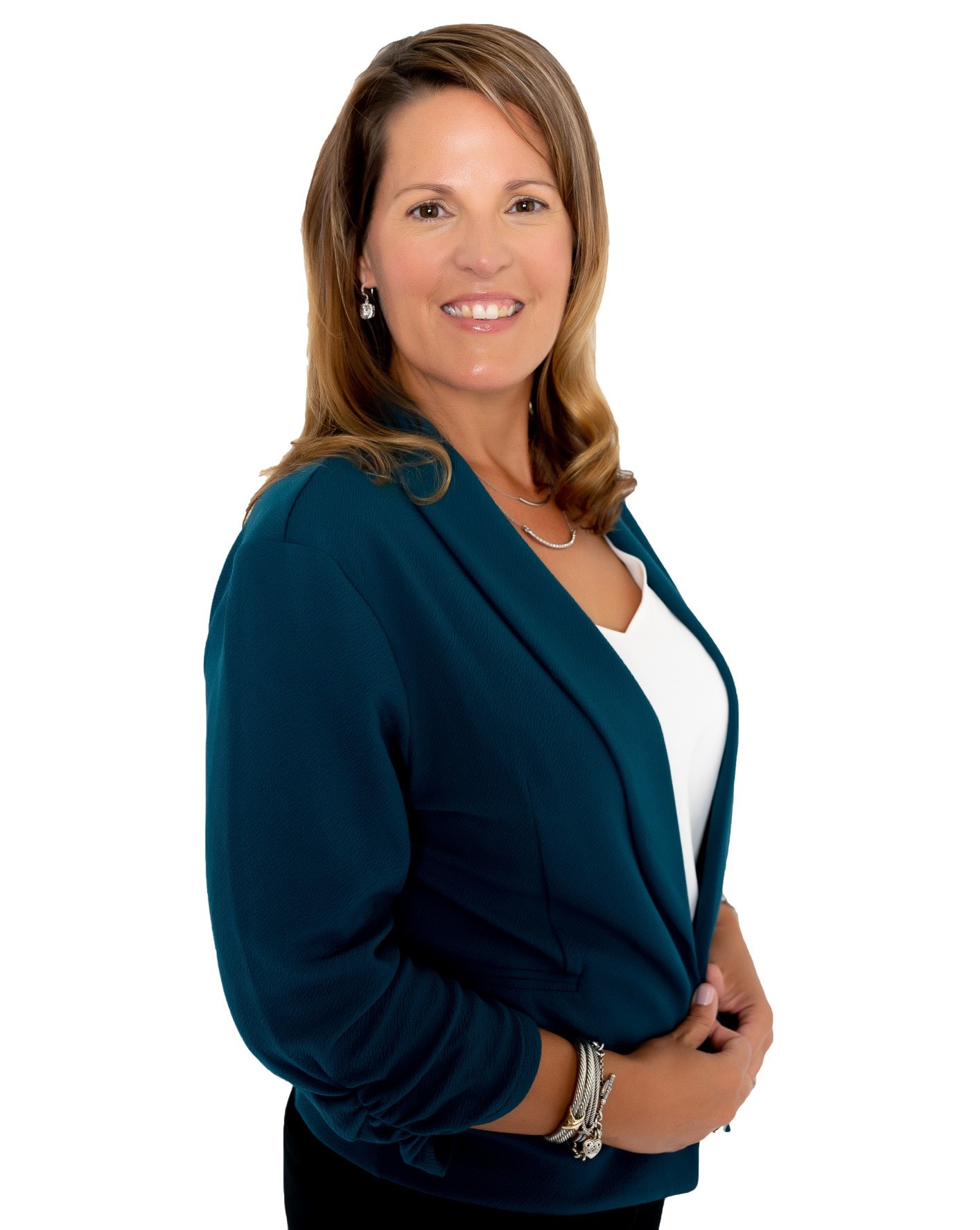 Kimberly Tatro grew up in Upper Darby, PA. Her path to Myrtle Beach began in 1990 when her family started vacationing here every summer. She earned a B.S. in Sport Management at York College of Pennsylvania where she met her husband Eric. After college they moved to his hometown Pompton Lakes, NJ.

While working in NYC she earned a Masters in Sport Science from United States Sports Academy and began adjunct teaching on the side at John Jay College of Criminal Justice in the Health and Physical Education department.

In 2008, Kimberly and Eric bought a vacation home in Myrtle Beach and would visit every 6-10 weeks. In 2012, now a family of four the Tatro’s took the leap moving 700 miles from city life to the beach life. Although nervous, scared and bittersweet they never looked back. It was the best move to make for their family. Kimberly’s parents moved down two years later upon their retirement and Eric’s dad purchased a vacation home in Surfside Beach.

Kimberly stayed home with the kids for three years taking full advantage of all the area has to offer. She then joined Coastal Carolina University, Department of Kinesiology as a Lecturer in 2015.Kimberly has been friends with The DeForrest Team since 2013; she has always been interested in a career in Real Estate and loves working with people. Her strengths in education, organization and attention to detail will be her strongest contributions to the team.

Kimberly and Eric reside in the Market Common area with their now three children who are active in soccer, gymnastics, golf and surfing. The Tatro's are avid sports fans and often a divided household. While they all like Clemson Football and the NY Yankees, Kimberly is Philadelphia Flyers and Eagles while Eric is NY Rangers and Giants.

$650,000
4 Beds ⋅ 3 Baths ⋅ 2300804 MLS
Alluring four bedroom, three and a half bath house in the gated community of Harborview. Luxury vinyl flooring throughout the first floor, carpet in bedrooms and loft area, and tile in bathrooms. The gourmet kitchen boasts 42" white cabinets, granite counters, stainless steel appliances with a gas cooktop, vent hood, wall oven and microwave, custom herringbone backsplash, a work island with seats and custom stone trim, a breakfast nook, beam ceiling, and a pantry. The towering living room has a ceiling fan, feature wall with wainscoting and stone, a bump out fireplace with shiplap and custom shelves and mantle. The primary suite has a trey ceiling with fan and a private bathroom with custom Moroccan style tile, white cabinets, double vanity, granite counters, tile backsplash, vast walk-in shower with bench and rain shower head, walk-in closet and linen closet with custom shelving, and a water closet. Upstairs you will find a sizable open loft, two bedrooms with a sharable bathroom and the fourth bedroom with a private bathroom. Through the screened in porch with custom lighting and ceiling woodwork you will enter the backyard that is built for entertainment and relaxation. Fully fenced in backyard, heated inground pool with spa, paver patio, a pergola, fire pit area, and river rock landscaping. Other upgraded features include, drop zone and laundry room, office with shiplap and custom shelving, woodwork in ceilings on front porch and foyer, wainscotting in bedrooms, upgraded powder room, tankless hot water heater, AC unit in garage, adjustable storm windows, lawn sprinkler, and much more. Harborview is a natural gas community with a community clubhouse and pool, located near shopping, dining, entertainment, hospital, and a short ride to the beach. Square footage is approximate and not guaranteed, buyer is responsible for verification.

$485,000
4 Beds ⋅ 3 Baths ⋅ 2226162 MLS
Single level, four bedrooms, three bath, house located on a Cul-de-sac in the Chapel Ridge community. This house is wrapped in hardiplank siding and sits on a little over .75 of an acre with a fenced in backyard, two car side load garage, a large driveway, and a second driveway for an RV, boat, or whatever your heart desires. Beautiful live oak tree in the front yard. The open concept living room boasts laminate flooring, recessed lighting, trey ceiling, ceiling fan, and four large picture windows and transoms letting in tons of natural light. The kitchen is equipped with stainless steel appliances, granite counters, pantry, breakfast bar and breakfast nook with bay windows. Adjacent to the kitchen is a formal dining room with trey ceiling and chandelier. The first-floor primary bedroom has trey ceiling, recessed lighting, ceiling fan, and access to the rear porch. The private primary bath had a jetted tub, stand-up shower, double vanity, water closet, and two closets. All other bedrooms have ceiling fans. Two bedrooms share the full hallway bathroom with tub shower combo. The third bedroom has a private bath with vanity and stand-up shower. The fully fenced in private backyard has a covered porch with ceiling fan, an oversized 17'X10' patio slab, and views of the forest and pond. Other features include laundry room, house generator, garage shelving, new electric and gas HVAC (HVAC is dual heat, so in the event that the electricity goes out, it will immediately convert over to using propane), five-hundred-gallon propane tank and much more. This HOA allows boats, RV's, pools, detached garages, and other amenities. Please always check with HOA for approval. Chapel Ridge community is located near schools, dining, entertainment, shopping, hospitals, and is a short drive to the beach. All measurements and square footage are approximate and not guaranteed. Buyer is responsible for verification.

$235,000
3 Beds ⋅ 2 Baths ⋅ 2300394 MLS ⋅ 5026 BLDG.
Beautifully updated three bed and two bath end unit in the gated community of The Fountains. Luxury vinyl flooring throughout with Moroccan style decorative tile in foyer. Vaulted ceilings in the living room and dining room make for a spacious feel with four picture windows letting in tons of natural light. The kitchen boasts granite counters, white cabinets, tile backsplash, stainless steel appliances, pantry, and a breakfast bar. The primary bedroom has a ceiling fan, walk-in closet, and a private bathroom with granite counters, stand up shower with glass door, and custom shelving for storage. The other two bedrooms are located at the front of the unit, both have ceiling fans, and they share a hallway bath with a shower/tub combo, vanity, and a linen closet. Other features include laundry room with shelving, linen closet in hall, upgraded ceiling fans, usb plugs throughout, screened in porch with access from primary bedroom, large front porch with attached storage, and much more. The Fountains offers a community pool and is located near award winning schools, dining, entertainment, shopping, hospitals, and is a short ride to the beach. Square footage is approximate and not guaranteed, buyer is responsible for verification.

$235,000
3 Beds ⋅ 2 Baths ⋅ 2226394 MLS
Welcome to South Bay Lakes, located just 2 miles from the Surfside Pier and beautiful Atlantic Ocean. This newly remodeled, second story unit boasts three bedrooms and two full bathrooms. New LVP flooring and fresh paint throughout makes this condo the perfect blank canvas to make your own. All cabinets have been resurfaced and painted to give them a more modern look. The spacious patio off the living room is one of the only ones that comes equipped with vinyl shutters to enjoy outdoor relaxation the entire year. Currently vacant and ready for its new owner!

$225,000
1 Beds ⋅ 1 Baths ⋅ 2301719 MLS
Gorgeous one bedroom, one bath, oceanfront condo with a full kitchen in the popular Pinnacle tower of Compass Cove. LVP flooring throughout. Updated kitchen with granite counters, white cabinets, stainless steel appliances, and custom backsplash. Pullout sofa and murphy bed in the living room allow for more people to sleep comfortably. Beautiful views of Myrtle Beach and the Atlantic Ocean from the large balcony. The Compass Cove Resort offers wonderful amenities including indoor and outdoor pools, hot tubs, a kid pool and play area, indoor and outdoor lazy rivers. The Resort also has an on-site Compass Rose and Crow's Nest Restaurant and bar, exercise room, on-site tiki bar and grill. Plenty of covered parking. The Pinnacle is located near shopping, dining, entertainment, golf, the airport, Market Commons, and much more. Square footage is approximate and not guaranteed, buyer is responsible for verification.

$145,900
2 Beds ⋅ 2 Baths ⋅ 2301463 MLS
Beautiful two bedroom, two bath, condo on the second floor in Myrtle Greens. This unit has a full-size kitchen, private primary bath, living room dining room combo, front balcony, and screened in back porch with attached storage. New stove being installed a the end of the month. Wonderful amenities on site such as an outdoor pool, tennis courts, fitness room, and much more. Located adjacent to Conway Medical Center, Coastal Carolina University, and HG Technical College this is a convenient and economical option to renting. Square footage is approximate and not guaranteed, buyer is responsible for verification.

$130,000
2214718 MLS
WOW what a fantastic building lot in the prestigious luxury lake community of Wild Wing Plantation. This rare cul-de-sac lot offers a secluded setting that backs up to woods and offers view of the 4th hole of the Larry Nelson designed Wild Wing Avocet championship golf course. Lot #492 is the perfect lot to build your dream home to be built on this lot. You can choose from multiple building plans or have your own custom-built home built on this fabulous secluded wooded lot. Enjoy the many SC lake birds, including blue heron, egrets and even eagles. Wild Wing Plantation has over 180 acres of lakes for you to explore and enjoy. The community features custom built brick and stucco style luxury homes. You can use your own builder or use our featured builder with no time frame to build. Association amenities included large clubhouse, multiple outdoor pools, hot tub, 80’ waterslide, tennis/pickle ball courts, basketball court, playground area, huge day dock, private boat ramp and owners private boat/RV storage. Be sure to have your Realtor ask about the Wild Wing Golf Club membership promotion that the developer is offering!!! Wild Wing Plantation offers convenient easy access to Coastal Carolina University, shopping, the beaches and all that Myrtle Beach and Conway has to offer. Check out the new 4D Virtual Tour to explore the amenities that Wild Wing Plantation offers you and your guests.

$124,900
1 Beds ⋅ 1 Baths ⋅ 2301449 MLS
Beautiful first floor, one bedroom, one bath, condo in Myrtle Greens. This unit has a full-size kitchen, living room dining room combo, front porch, and back porch. Wonderful amenities on site such as an outdoor pool, tennis courts, fitness room, and much more. Located adjacent to Conway Medical Center, Coastal Carolina University, and HG Technical College this is a convenient and economical option to renting. Square footage is approximate and not guaranteed, buyer is responsible for verification.

$124,900
1 Beds ⋅ 1 Baths ⋅ 2301448 MLS
Wonderful first floor, one bedroom, one bath, condo in Myrtle Greens. This unit has a full-size kitchen, living room dining room combo, front porch, and back porch. Wonderful amenities on site such as an outdoor pool, tennis courts, fitness room, and much more. Located adjacent to Conway Medical Center, Coastal Carolina University, and HG Technical College this is a convenient and economical option to renting. Square footage is approximate and not guaranteed, buyer is responsible for verification.